As I prepared for my recent trip to Russia, many Americans were concerned with the timing of my trip, given recent events in Ukraine and the Crimea, with resulting diplomatic upheaval between the US/NATO/the EU and the Russian Federation. Others, less familiar with my work, commented (jokingly, I think) that it’s a good time to be an American spy! On the one hand, I bristle at the implication that all Americans interested in Russia must be spies. On the other hand, this type of comment offers the perfect opening to talk about the importance of citizen diplomacy.

The truth is that while I bill myself as an ethnographer of Russia, and my work focuses theoretically primarily on the social inclusion/exclusion of people with disabilities, actually, as an American citizen who spends long stretches of time living with and amongst average Russian citizens, I am also a citizen diplomat.

It’s easy, after years and years of Cold War rhetoric, for Americans to simply view Russia and Russians through the lens of national security and international competition. With so much of our news media discussion of Russia focused on international relations, economic sanctions, border conflicts, and critical reports on Putin’s leadership, or even spy scandals, the dominant lens through which most Americans view Russia is skewed toward the military, the high level negotiations, and clandestine intelligence. Compare this, for example, with our exposure to the goings on in Great Britain – we hear relatively little about scandals in Parliament, the corruption of the royal family, social unrest, or imperial ventures; instead, American news media focuses on British pop stars and athletes, hokey stereotypes about double-decker buses and tea-drinking, and reality TV breakout stars. The overall message that Americans get from mass media is that the Brits are just like us; meanwhile, the Russians are an oppressed, disempowered and undifferentiated mass subject to a corrupt kleptocracy led by power-hungry, territory-grabbing Putin.

Of course, this is false.

Russians have just as many pop stars and reality shows, and drink just as much tea, as the Brits. Like Americans, very few Russians are actually spies for their government – most are teachers or doctors or bus drivers or factory workers. It’s just that American media coverage of Russia does a very bad job of communicating this. Moreover, while Russians listen to American pop music, and can go and see Hollywood-made movies any day of the week, Americans have almost no exposure Russian pop culture (do you know who Kseniya Sobchak is?).

Point being, that while high level negotiations are of grave importance, we often forget that one of the most important “weapons” that the United States deployed during the opening of the Soviet Union in the 1980s was citizen diplomacy. As a form of soft power, citizen diplomacy relies on the idea that knowing actual people on a personal level allows citizens of two nations that might otherwise appear to be opposed to soften towards one another. Like Sting’s (now absurdist) nuclear disarmament lyrics, “I hope the Russians love their children too,” the thrust of citizen diplomacy is that non-military ties between average citizens promote peace and friendship on both the personal and international levels.

It is in this spirit that I forged ahead with my planned trip to Russia at the end of March, 2014, a moment when world media was reporting unresolved diplomatic crisis between out two countries. In an email to my mentor and visa-invitor, Larissa Dmitrievna Boichenko (a professor of international human rights and leader of the Gender Research Center in Petrozavodsk), prior to the trip I asked for her opinion about the planned travel, and wrote that, it seems that times of escalating discomfort on the international level only underline the need for the kinds of academic ties and citizen diplomacy that we share all the more. 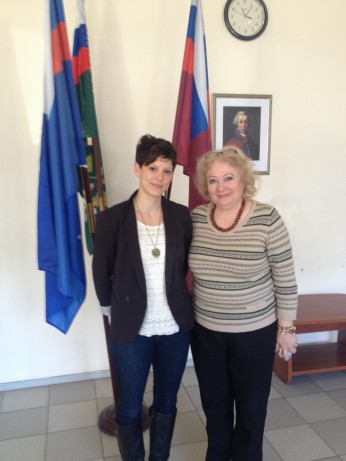 Cassandra Hartblay and Larissa Dmitrievna Boichenko in the lobby of the Northern Branch of The Russian Law Academy of the Russian Federation Ministry of Justice in Petrozavodsk.

In fact, it was citizen diplomacy that brought me to Petrozavodsk in the first place. I was a high school student at Amherst Regional High School in Massachusetts in 2002 when I participated in an on-going exchange program to Petrozavodsk. The program, begun in the early 1980s as part of the glasnost’ effort, and administered by the state department, began an ongoing series of exchanges between my high school, and it’s exchange sister, School Number 17, in Petrozavodsk. The exchange was successful and continued over many years in large part because of the determination and diplomatic efforts of our Russian teacher, Jude Wobst, and her counterparts in Petrozavodsk. I don’t know how many of those original exchange pairings remain intact, but it is certainly remarkable that the ARHS-School Number 17 relationship is now over twenty years old (contrast this with the sad state of the sister city relationship between my current city, Chapel Hill, NC and its Russian counterpart, for example).

The truth is, that while recent op-eds have bemoaned the lack of support for developing expertise in developing relationships with Russia and an awareness of Russian cultural ebbs and flows in the past twenty years, actually, a determined group of citizen diplomats (with support from under-acknowledged government agencies, like the Open World Leadership Center) has held steadfastly to this mission. In addition, Russian Studies and Russian Language programs at our nation’s universities have struggled to stay open and recruit majors, largely thanks to the efforts of determined and dedicated faculty (as someone who studied Russian in high school in the late 1990s, and in college in the 2000s, I literally never studied in a program that wasn’t under threat of being shutdown in the face of budget concerns or sudden fervor to start an Arabic program).

On my high school exchange program, I wasn’t the one who spoke Russian the best (not very well at all, in fact), or sang the best song at our intercultural talent show. But I have maintained ties with my host family to this day, and Masha, my host sister remains one of my closest friends.

I may not get to be a spy, but I do get to share twelve years of family memories with a dear friend who happens to hold a Russian passport.

In my work as an anthropologist, I get to repeat this process over and over again, as research participants and scholarly colleagues become first facebook buddies, then pals I see every other year or so, and even, eventually, close friends. Each time I leave Petrozavodsk, a different assortment of friends and acquaintances shows up on the platform at the train station, chocolate or snacks in hand, to bid me goodbye, and ask when I’ll next be back. It is my great privilege to be “nasha amerikanka” (our American) to this collection of Russian citizens, and the information that we share between us, about births, marriages, deaths, new jobs or favorite recipes and organic shampoo brands, may not be state secrets, but in the grand scheme of citizen diplomacy, they are certainly weighty indeed.

An photo from a scrapbook of the 1989-1990 ARHS-Petrozavodsk exchange (from Jude Wobst’s archives).

Masha and her stepdaughter go for a walk near their home in Petrozavodsk, 2014. (Photo by C. Hartblay).

My exchange sister Masha (center) and me (left) with a high school friend in Amherst during the 2002 exchange (personal archive).